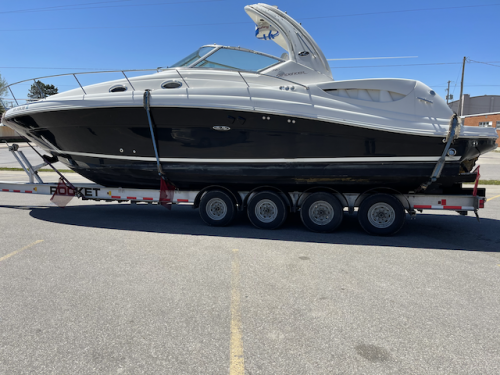 Great Lakes Haulers specializes in the transportation of marine vessels of all shapes and sizes. Oversized, over-dimensional, overweight boats, yachts, sailboats, houseboats, and even tug boats are our specialty. We treat every boat as if it were our own! We know that finding a professional to transport an oversized boat or one that does not have a trailer is not an easy task.

Our Sundancer 420 was our first big boat purchase and we didn’t know what to expect or how to go about finding someone. So we went to one of those websites where people bid on the job. What a horrible experience! The majority of the bids we received were from “carriers” but they either weren’t commercially insured or legitimate carriers. Even though they had a DOT number, when we checked with the FMCSA, their DOT either wasn’t even active or it was a broker authority. So they couldn’t have legally hauled our new purchase for us OR the broker was going to farm it out to someone else and take a hefty fee from the driver on top of the fee charged by the site. Highly recommend you don’t visit those sites! The prices will be lower but you’ll get what you pay for and risk your boat being stranded in the side of the road being hauled by someone not qualified.

Someone recommended Great Lakes Haulers to us and are we ever thankful!!! Stephanie answered every question we had and expanded on them to make sure that our minds were at ease throughout the whole process. She even provided us with a certificate of insurance with us listed so we knew we were covered if anything happened.

The big day finally came and Lenny, who is also the owner of the company, was our driver and he was amazing!!! His knowledge was extensive and made us feel like he could do this job blindfolded. He was personable and kept in touch with us the entire time and shared his location the entire 1300 miles. He gave us regular updates, sent pictures and gave us updated ETAs as he got closer. Great Lakes Haulers won’t stay in a truck stop, they only stay at hotels with plenty of parking and where they can see the boat which made us feel better.

They’re passion for what they do is obvious and they really do make you feel like you’re part of the Great Lakes Haulers family and that’s how we knew we found our transport company. Between the knowledge, patience, communication and passion they have, we would never consider anyone else the next time we need our boat transported!!

Great Lakes Haulers we’re a great company to work with. I called over 10 places to haul my used Four Winns 298 Vista from Chicago area to Charlevoix, Michigan.

Many places didn’t want job so quoted high prices, some never called back. Great Lakes Haulers called back quickly, quoted me a price, explained permits and delivery options. I decided to go with them and they told me they would check on timing. The next morning they told me they could pick up the boat with in a week. As promised they picked up boat, loaded it took pictures and sent them to me. They decided to travel through Michigans upper peninsula which saved permit charges, they called me when they were heading through Charlevoix so I could take pictures going through town. The driver carefully removed the straps, backed up trailer and launched boat. One engine wouldn’t start so driver stuck around in case it needed to come back out. I told him not to worry, tipped him and told him thanks for the great help. Overall it was a great experience, they were cordial, called me and kept me updated during process, took pictures, and no surprise charges. I would highly recommend Great Lakes Haulers!

They took the time to deliver the boat on time and stayed until I started the boat and left the dock. The boat was delivered without issue and could not ask for better service. Outstand transporter!!!