How To Safely Handle Another Boat’s Wake

Two principles that are important when you are a boater are 1) remaining in the boat while it is underway and 2) staying safe and dry while on board. How you handle wakes from other boats, particularly when you are aboard a smaller vessel, has a direct bearing on both of those principles.

Handling the other guy’s wake boils down to a few simple points. When a big wake or wave approaches your vessel, you should:

Having said the above, we need to recognize the real world. Maybe you do not have time to back off the throttle, or maybe you are one of those boaters that sees a looming wake as an opportunity to catch air. If you must take that wake at speed, do it at a 90-degree angle. Then contemplate your sins and try not to do it again. The likelihood of an accident increases the further to stray from that 90-degree angle. Below is a perfect example of a catamaran taking a wake at speed and at a 90-degree angle.

Before we drift away from the topic of wake jumping, it would be remiss not to mention the reports of vessels — especially personal watercraft — meeting in mid-air. It happens more often than you would expect. If you must wake jump (not recommended) you better be sure to take a good, hard look around to make sure another boater does not have the same idea. If you are with a companion boat or PWC, always jump in the same direction. Always.

Another situation where it can be hard to manage a wake is in a narrow waterway. Here, a potentially damaging wake is often caused by one responsible boater trying to pass another. For example, the vessel being passed is serenely cruising along, legally maintaining speed and course, and the overtaking vessel inches by.

Yes, the vessel being passed is within its rights to maintain speed, and the purist will say it is required to do so. But to get by the overtaking boat is often forced to throw a wake that can be dangerous to other vessels and shore-side structures. What should you do in these situations?

We’re glad you asked. When being passed in a narrow waterway, you should:

The other boat will appreciate your courteousness and so will the nearby dock owners and your passengers, who will all remain drier and safer. Remember that you are responsible for your own wake. 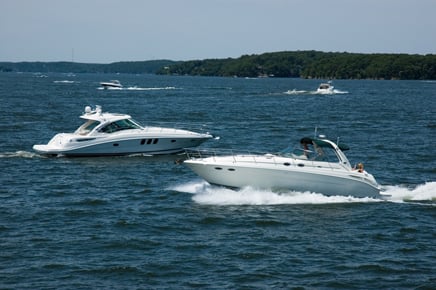 It can be argued that the wake of a vessel on plane, especially a deep-V hull design, is of a lesser magnitude than that of a semi-displacement hull at cruising speed. On the other hand, the excuse that you were speeding to reduce your wake might not hold water (so to speak) with that curious water patrol officer.

What will work at nearly all speeds is proper trim and weight distribution. The wake of a well-trimmed boat will be less and tend to dissipate sooner, than the vessel that is pushing unnecessary water. With smaller vessels bowriders, for instance, the skipper will feel the boat’s response to an equal weight distribution, which will also help alleviate the wake.

What is most important, not just for avoiding and/or not creating annoying wakes, but in all aspects of boating is “situational awareness.” Loosely interpreted, situational awareness means consciously not being distracted, being aware of your surroundings, and what you are approaching and what is approaching you. We can do all this and still have fun, which is why we are on the water in the first place.

Chances are we have all had close calls with another boater’s wake at one time or another. What did you do to handle the situation, and what if anything would you do differently? Tell us about it below.