Tying up to other vessels is to boating what Facebook is to the Internet: a great way to connect and interact with pals. But there is still plenty that can go wrong if you do not do it the right way. Just ask the fiberglass repair guys and pontoon welders at your marina or boat dealership.

Fact is, there is no such thing as truly calm water. And even though tying up to other boats is usually done in benign conditions, there is always some movement, which becomes more significant the closer boats get to one another. In addition, along with fast-rising natural conditions like wind and storms, we have the occasional socially awkward yahoo who cruises up tossing a bigger-than-safe wake. 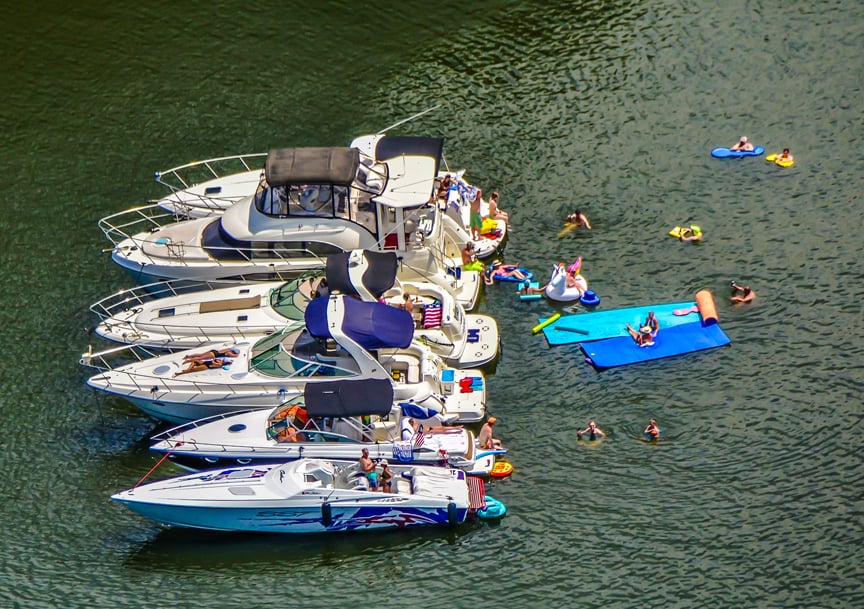 Here are a few hints on how to tie up to other boats the right way and keep the vessels from bouncing off each other:

Visiting from boat to boat during a tie-up is a no-brainer: you just step right over. But there are occasions when you might also want to boat-hop in open water. This is one of those things that looks easy, but the closer two boats get, the possibilities of mishap increase. For instance, a slight swell seen from 100 yards away might not be so innocuous when vessels approach step-aboard distance.

And, need we say, you should never “jump for it.”

While it may be tempting to pull two boats together stern to stern, especially when both vessels have inviting swim platforms, this practice should be strictly avoided. It is difficult to judge distances this way. The last thing you want is for the swim platforms to slam into one another, causing boat damage or, worse, sending a waiting passenger into the water.

A beam-to-beam crossing is the best way to transfer people and goods. Have the vessel with the disembarking person approach against the wind. Come in slowly with fenders deployed and have spring lines ready to toss to the other boat. Most problems during a beam-to-beam transfer will result in the vessels drifting apart, so make sure the lines are secure before anyone moves from one boat to the other.

At the moment of transfer, boat transmissions should be in neutral (i.e. the props are not turning) but both boat captains should be ready to engage the controls should something go unexpectedly wrong. Once the passengers, boat bags, coolers, and whatever have been safely moved from one boat to the other, simply untie the lines and part ways.

Of course, the best place to visit from boat to boat is when both are in their respective slips. It is so much easier to just walk down the dock and step aboard. In other words, why leave a perfectly good boat that is not sinking?

Any other tips you can offer up for boaters to tie up safely? Where do you and your friends tie up?