Lake of the Ozarks, Missouri

Lake Of The Ozarks Water Level - How It Is Controlled

Is part of your dock sitting on the lake floor after the winter drawdown? Have some of your favorite coves been shortened by low water levels? This is the time of the year when many boaters ask themselves, “When are they going to raise lake levels?” After all, the weather has been nice and boating season is underway.

How water levels have been managed at Lake of the Ozarks has changed dramatically throughout its rich history. The lake stretches 92 miles end to end. In 1931, it was the largest man-made body of water in the world. Lake of the Ozarks is a huge lake with many stakeholders. Everyone is affected by lake levels.

Here are five important items you need to know about lake level management at Lake of the Ozarks:

1. The Federal Energy Regulatory Commission  (FERC) license establishes lake levels. FERC requires Ameren use a “Guide Curve” when operating the Osage Power Plant at Bagnell Dam. The Guide Curve establishes upper and lower lake levels throughout the year. Changes to the limits and guide curves over the years has resulted in lake levels averaging 2.5 feet higher today than they did in earlier years of operation. The plant at Bagnell Dam is currently operating under its third FERC license, which was issued in 2007. It was in this license where lake tourism and property owners became “significant” stakeholders in the licensing process.

2. The Guide Curve establishes parameters, not rules. In other words, lake levels can fluctuate anywhere between the emergency low limit of 645 feet to the upper limit of 660 feet. The guide curve lowers the lake level to 654 feet in March and April, but raises it to 659 feet by Memorial Day. Lake of the Ozarks has higher average lake levels today than it did in its early years after a significant push by lake property owners and tourism industry stakeholders. The Federal Power Commission (predecessor to FERC) license in 1925 had a low-level limit of 630 feet. Today, the low-level limit is set at 645 feet. However,  higher average lake levels may result in higher water levels during flood events. Moreover, during flood events, lake levels may be five to 10 feet higher at other areas of Lake of the Ozarks than they are at the dam. 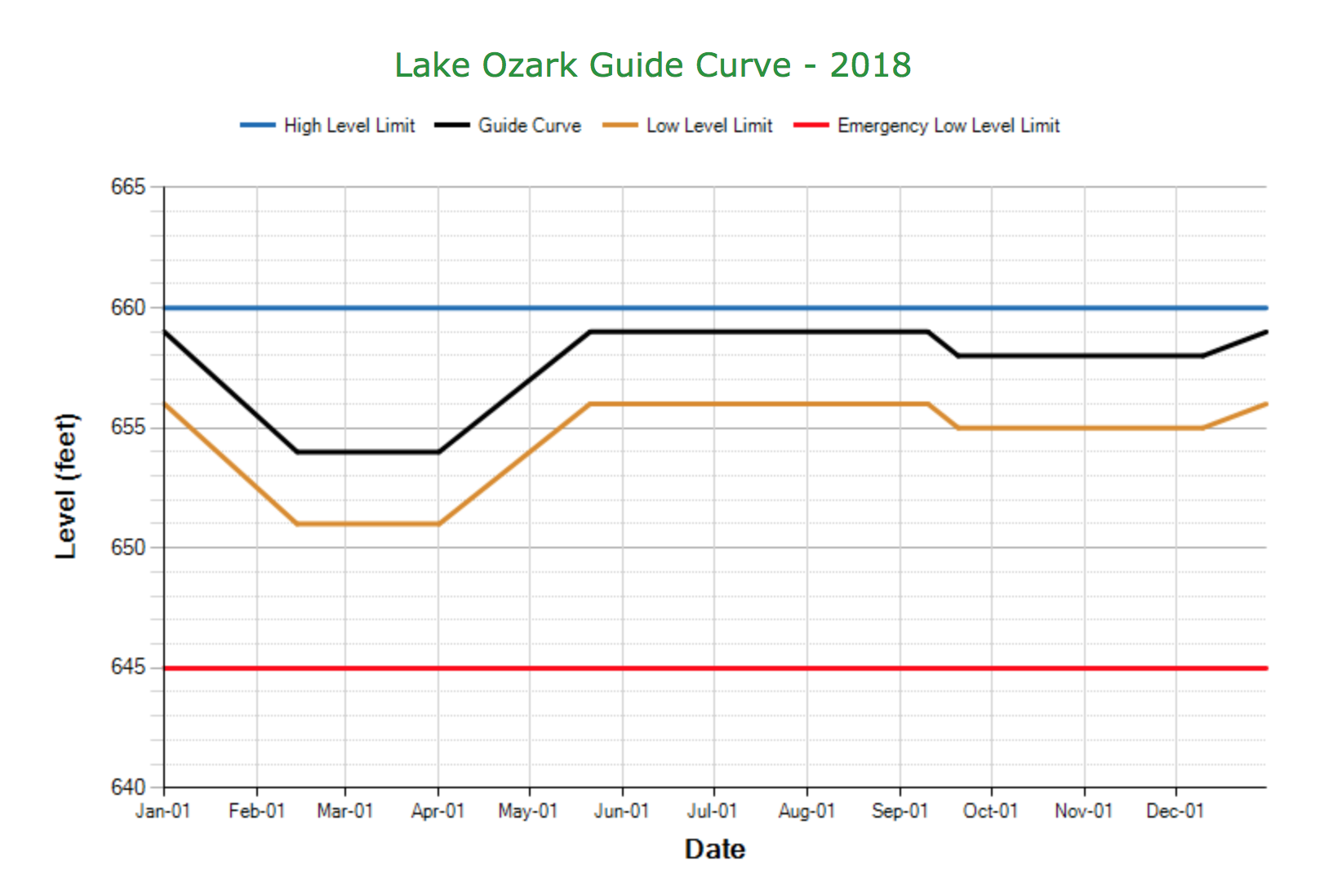 3. ‘Flood pool’ allows lake levels to exceed 660 feet. Even though the upper lake level limit is 660 feet, the lake is allowed to go to 661 feet in a particular situation known as the ‘flood pool.’ Flood pool was added as protection for downstream property owners. This allows Ameren to have some wiggle room. In other words, they don’t have to open the spillways at 660 feet if it’s clear the lake will not go over 661 feet by using the turbine generators.

4. Water is released at a ‘natural flow’ rate when above 50,000 cubic feet per second with the lake rising. Ameren says,  “...natural flow is defined as the flow that would exist in the river downstream if Bagnell Dam was not in existence.” Water can be released at a higher rate if the lake gets above 665 feet. 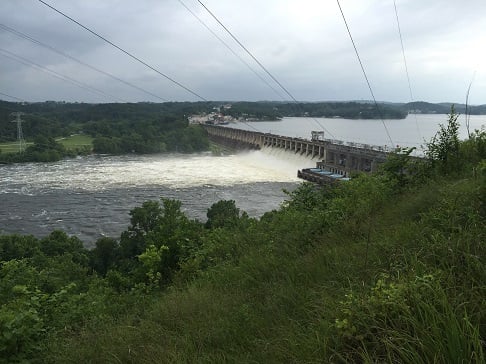 5. Operational decisions are not based on the weather forecast. While the National Weather Service (NWS) has improved dramatically, the science of weather is unpredictable. Operational decisions based on weather forecasts could leave the lake woefully low during peak tourism season or dangerously high at other times. Forecast rain may not happen or could be much worse. Ameren says effective water level control must rely on the operational controls in place, not on the weather forecast. However, Ameren does work closely with the NWS during routine operations and more frequently during heavy rain events.

Heavy rain events and flooding are why Lake of the Ozarks has a dam to the north. Truman Dam probably wouldn't have been built if  Bagnell Dam did a better job at flood control. Truman Dam was built for flood control because Bagnell Dam’s primary purpose was to generate electricity.

Lake levels are on the rise. By Memorial Day, they should be around 659 feet. Boaters will have access to all areas of the lake. Where do you like to cove-out? Where is your favorite area of the lake to ski or wakeboard? What’s your favorite time on the lake (morning, afternoon or evening)? Join the conversation, we would love to hear from you!